Are you going to make cars in Australia?

Yes. But setting up a car manufacturing enterprise requires a lot of money. This can be reduced by commencing manufacture using a donor platform, like Tesla did with their Roadster which was based on a Lotus Elise. We will take the same approach. However, our success is not contingent on building cars, we will develop key components such as transmissions and can supply these to other car manufacturers. We will also consider licensing our technologies to other manufacturers. Our fallback plan is thus to focus on component supply and technology licensing.

Will you take over an existing manufacturing facility?

As Ford, Holden (GM) and Toyota wind down their manufacturing operations in Australia for slated 2017 closure, plants, people and other capability is becoming available providing great opportunities for us. We are well placed to exploit these, but we are yet to determine where we will manufacture.

How will your development be funded?

We will be funded through several rounds of private investment, and we expect that this will be followed by an IPO. Realistically it is not feasible to set up a car manufacturing enterprise without government support; even Tesla didn’t manage without a $US465M loan from the US government (which it has already repaid). We are not looking for government welfare; we believe that this runs counter to staying lean, nimble and hungry. Our policy will be, with the exception of competitive grants, to accept only loans from governments. Our success is not dependent on government assistance; we can establish ourselves as a component manufacturing firm without this. We are hopeful that in future the unspent money on the $900M Automotive Transformation Scheme will be allocated at least in part to support ventures such as ours. The future of the Australian Car Industry is currently the subject of a senate inquiry. See our submission here.

How can you take on the established players in the automotive arena?

The automotive landscape is changing, and many automotive firms are not keeping up. Over the next decade or two we will see an accelerating convergence between automotive technology and communications, IT, home energy and robotics technologies. Our cars will become self-driving, they will double up as our office/entertainment centre and become integrated with our home energy supply. This provides huge opportunities for new firms with new technologies to get established. Most car manufacturers are constrained by legacy platforms and manufacturing systems optimized for internal combustion engines and conventional drivelines. Tesla has demonstrated how a new manufacturer with a clean-sheet-of-paper design optimized for electric vehicle technology can steal the march on the established manufacturers. Tesla, in the space of 12 years, has a market value of $25B, half that of GM. The advantages of a clean-sheet design are at their maximum in a 4WD architecture – and this is the space in which we will focus.

What is your business model?

Our goal is to manufacture and sell premium quality vehicles in moderate volume. We will also license our intellectual property (IP) to automotive component and vehicle manufacturers globally where this does not conflict with selling our cars, whilst continuing to develop our IP and generate new IP. We expect that some of our IP with regard to the integration of electric vehicles (EVs) with home energy supply systems can be licensed to companies in the home energy sector, particularly those for whom the ability to offer households the option of disconnecting from the electricity grid using our technology is a compelling selling point. This will bolster the demand for our cars.

We will also consider the sale of components incorporating our IP, such as transmissions, to other manufacturers.

Why will manufacturers want to license your technology?

Our technology is ground-breaking and facilitates major advances in the capabilities of electric vehicles. Based on our patent searches it is anticipated that our patents, when granted, will provide broad and strong protection. Patents are difficult and costly to defend however, but the ability for licensees to get our technology to market rapidly due to our ability to provide proven designs and assistance in their implementation will be very attractive.

What type of cars will you make?

Our focus will be off-road capable SUVs, specifically a range-extended electric SUV. Our designs will address the strong market demand for off-road capable SUVs. And when we say “off-road capable” we mean something that will leave the gnarliest Jeep or Landcruiser way behind. With breakthrough technology, primarily in drivetrain and suspension, we sidestep the compromises inherent in conventional 4WD designs, allowing us to provide class leading on-road performance as well as off-road.

What is a range-extended electric vehicle?

A range-extended electric vehicle (EV) is an EV that also has a small engine running on a conventional fuel such as petrol or diesel that is used to generate electricity when the battery charge is running low. Our vehicle will be able to do around 200km on battery alone, more than enough for the daily commute, and an additional 1,000km on the range extender. So range anxiety, long recharging times, and absence of sufficient road-side chargers will not be an issue.

No, these are concept sketches only, but give an idea of the direction we are heading. Our vehicles will be contemporary, innovative and tough to deal with Australian conditions. The way they look will reflect these core values.

What are your capabilities in technology development?

Red is a spin-off from leading Australian engineering design consultancy Applidyne who have a 22 year track record at developing new technologies and products and assisting their clients get them to market. They have extensive experience in a diverse range of sectors, including development of defence hardware for Australian defence contractors, development of an active suspension system for mining dump trucks, development of automotive mechanisms such as for electric seats and rear view mirrors, and the development of micro-cogeneration technology for the home energy market. A team of engineers will be assigned from Applidyne and we will also build up our own capability, employing talented engineers, and using other contractors as appropriate.

Is this the same as Overlander?

Yes, we rebranded to Red Automotive Technologies after striking some trademark issues.

If you make cars in Australia, how can you succeed when all the others have failed?

Our car will be a premium product. Globally, the automotive manufacturers making money are primarily those making premium product with a competitive advantage based on brand or technology. Think Porsche, think Tesla.

How can you take on the established players in the automotive arena?

The automotive landscape is changing, and many automotive firms are not keeping up. Over the next decade or two we will see an accelerating convergence between automotive technology and communications, IT, home energy and robotics technologies. Our cars will become self-driving, they will double up as our office/entertainment centre and become integrated with our home energy supply. This provides huge opportunities for new firms with new technologies to get established. Most car manufacturers are constrained by legacy platforms and manufacturing systems optimized for internal combustion engines and conventional drivelines, and component manufacturers have been slow to focus on tomorrow’s technologies, particularly how they will be integrated in vehicles. Tesla has given us a glimpse of this future. We will be driving this vision further. We will focus on our key technologies in transmissions and integration of range-extended electric vehicles with home energy generation and supply.

What markets will you sell your cars to?

Our initial focus will be on the Australian and NZ markets, but export markets such as the US, Middle East and Europe will be an early focus. Ultimately we expect that over 90% of our production will be exported.

Can we build cars profitably in Australia?

Yes we can! Let’s have a look at a couple of car manufacturing myths:

Myth #1: To be profitable, a car must be made in a low labour cost country

Note that other than some Camrys none of these are made in Korea, Thailand, etc.

The most profitable manufacturers are shown below. As you will see, profit margins are not high, but a 10% margin on sales of tens of billions is still fairly attractive….. 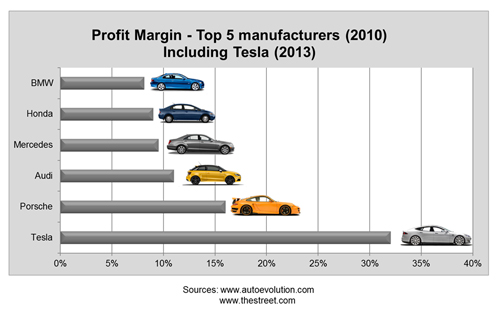 Myth #2: Like the UK, we can’t have a viable car industry
The UK car industry was wiped out after British Leyland failed and MG went out of business, right?

Wrong! As Wikipedia will tell you:

In 2008 the UK automotive manufacturing sector had a turnover of £52.5 billion, generated £26.6 billion of exports and produced around 1.45 million passenger vehicles and 203,000 commercial vehicles. In that year around 180,000 people were directly employed in automotive manufacturing in the UK, with a further 640,000 people employed in automotive supply, retail and servicing. The UK is a major centre for engine manufacturing and in 2008 around 3.16 million engines were produced in the country. The UK has a significant presence in auto racing and the UK motorsport industry currently employs around 38,500 people, comprises around 4,500 companies and has an annual turnover of around £6 billion.

Carmakers invested a total of £7bn in the UK in 2013 and 2014 as the UK motor industry boom continued. UK factories produced more than 1.5m cars in 2014 – an increase of 50% over five years and the sector’s best year since 2007, before the financial crisis.

How will you break into this difficult market?

Technology that will result in cars that people want to buy is the key. The ground breaking technologies that we are developing are described here. These technologies are key ingredients for a desirable product.